The Mental Part of The Agility

Doing well in agility competitions is greatly affected by our mental management and what we say, think and do. Not many realize how sport psychology can improve your agility performance. I know first hand how big a part mental management plays in the game of agility. 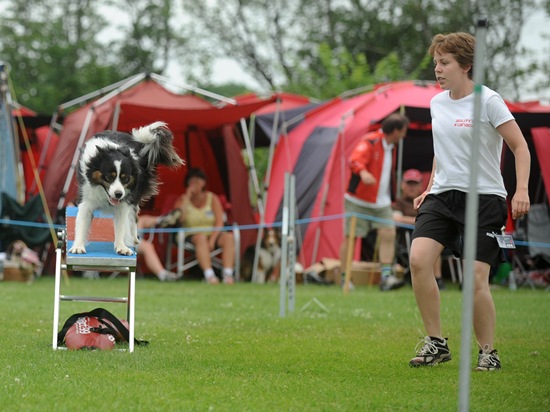 When I started competing with Cosmo back in 2005 being nervous and having self doubt never crossed my mind. I was having fun with my dog - and competing was just another course to run clean.

It all changed when Cosmo advanced to class 3. Within four months from his first competition he was competing at the highest level in Denmark. Competing against the best of the best was overwhelming and scary for me. I felt totally out of my comfort zone even though I had earned the right to compete in class 3 like everyone else there.

I remember one time I had to start with Cosmo right after Jenny Damm, the owner of Zap and Bobs sire Elvis and twice world champion, I watched her run clean in an awesome time placing her in the lead. I totally choked. My legs where shaking and I almost couldn't get my self to step in to the ring. I was convinced that I had no change at being as good as her - Ever! Unfortunately I had already set my self up to failure and the outcome was an elimination at obstacle 3. I left the course feeling worse than ever, saying to my self 'I knew this was going to happen!'. I felt everyone was watching me and Cosmo and judging me for my bad handling.

After that trial the clean runs came further and further apart. We mostly ended up being eliminated and I started to think we would never have a clean run again. The joy and excitement of packing our trailing gear and heading off to a competition was gone.

I didn't know anything about the mental part of agility or how to deal with what I was experiencing. I tried telling my self feeling this way was stupid but it made no difference. In order to cope with myself and the situation I bought a Swedish book called 'Luckas På Tävling'. I read the book from cover to cover and started setting goals as described. Goal setting seem to be the way to go at that time, but even the smallest goal seemed unachievable. I would for example set the goal to get all contacts in a run, but I ended up so focused on those contacts that I over-tried and failed big time. Not the best thing to do when your self-esteem is already non-existing.

At this time Cosmo's jumping was way off and I took some time off from competing to work on his problem area. When I was searching for information about dogs jumping style I came across a book called Freedom Flight by Lanny Bassham. It is an authentic and truly life changing story. it puts every aspect of life into perspective. I'm not going to reveal anything about the plot 'cause I think you should read it your self.

After reading the book I started seeing my situation from a whole new perspective and I bought the book With Winning in Mind and the audio CD What Every Agility Competitor Should Know First About The Mental Game. When I started competing with Cosmo again, I felt better when entering the ring. Due to unfortunate circumstances I had to put Cosmo to sleep and I took another break from competing.

In 2010 Poncho was ready to compete. Knowing more about the mental game I was no longer nervous when running him and we had some great runs during the season. Sometimes though it still feels like I'm having a mental block disabling me from being consistent, perform my best and run clean.

I have been meaning to read With Winning in Mind again for quite some time when something funny happened last weekend: My friend Channie visited us and among other things we discussed the mental game. I mentioned that my two biggest hurdles was not thinking I could run clean and not being able to focus on the task ahead. Later that day out of the blue I received a notice on Twitter informing me that Mental Management was following me. A coincidence? But nevertheless very motivational. I grabbed With Winning in Mind from the book shelf and started working on the practical part of the program. It couldn't hurt, right?

The first thing I did was writing a Direct Affirmation for thereby changing my self image. I made five handwritten copies and placed them around the house. For 21 days I have to read and visualize my Direct Affirmation daily in order to change my self image. When the time is up, I'm going to take a nine day break from visualizing and then reevaluate: Do I need to read/visualize the Affirmation again, change it up a bit or is it good enough as it is?

This Affirmation thingy should be a pretty powerful tool. It certainly did something 'cause I dreamed of running clean all night!

Next I worked on my mental program which has five steps. By running a mental program before each run I'm able to improve my concentration and focus. I haven't tried it in practice yet, but I will get a change to do so soon.

Besides these practical exercises, the book offers many great aspects and thoughts on competing. Like being positive, not reinforcing faults by dwelling by them and also only think about things you can control. Over all really recommendable for anyone competing in any sport. If you want the short version the audio CD is the way to go.

At the moment I am excited about competing, I feel refreshed and ready to do my best!

More on the mental part of agility coming up soon.