As I was pretty busy all weekend I didn't have much time to watch agility, but occasionally I saw a run or two while waiting for a course walk or so. One thing that puzzles me though is why people pay so much money for the entry fee only to be mad at their dog if something doesn't go according to the plan. 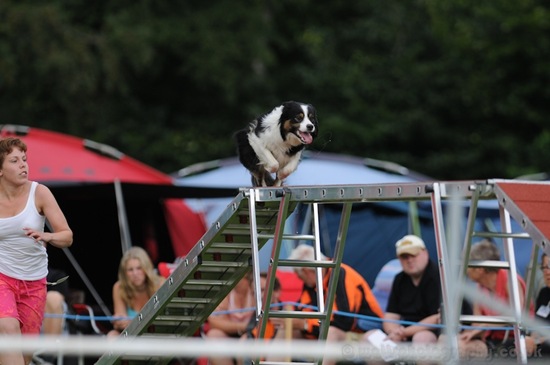 Given there's no money prizes in DK agility I'll have to conclude that we compete in agility because we like it. We spend weekend after weekend and countless hours at shows regardless of the weather, so this is where I start to wonder: Why spend the day at a show complaining about everything when no one forces you to be there?

The Dog's Performance
The dog is a reflection of your abilities as a dog trainer. There's is only one to blame for a bad performance and it is not the dog.
If something on course doesn't go according to plan I believe it to be my fault! Either the fault was caused by my handling or by lack of training which either way is my responsibility. Under no circumstances will I ever punish my dog - not in the ring or in training. I want confidence, speed and accuracy but most of all a happy dog and I don't think I will get either of those through punishment.

The Course
Next on the list is the course. I try not to think about the level of difficulty when I walk the course. I simply try to plan my handling in a way that will benefit my dog and get us quickest around the course. If I however feel that running the course will cause my dog to fail then I choose not to run it. My point being we all have the privilege of making a choice: If you don't like the course then you can choose not to run it. No, you don't get a refund on your entry fee, but it's your choice. Instead of complaining to my fellow competitors or start an argument with the judge, I will try to get the most out of the situation. My thoughts highly influences the outcome of my runs and if I were to think negatively about the course or judge I will guaranty you that I wouldn't get the most out of the situation. I do not want to waste my time on things I can't change and chances are slim to none that I will get the judge to change the course to my liking, so why start an argument in the first place?
A positive attitude gets you further in agility and life in general, which brings me to number three on the list.

The officials
Running three dogs in the same class can be challenging. I knew I would have to rearrange the dogs according to the running order to make things work which meant coordination with the ring officials. Some said that they experienced problems with the officials and that they weren't very cooperative. I must say, I experienced quite the opposite. After walking each course I talked to the official in charge of the running order, explained the situation, and got the dogs rearrange in a way so I had time to give each of them a proper warm up. You do get further with a positive attitude. Just smile, be polite and say thanks. The officials are volunteers and if it weren't for them there wouldn't be a show in the first place.

Whether or not you agree with me on this doesn't matter. I went home thinking I had a fantastic weekend with three talented dogs, which is so much better than thinking the dog and everyone else messed up the weekend for you.

I didn't write this post with anyone particularly in mind, but merely because I'm puzzled as to why people react the way they do.