Five hours on the road, nine hours at the competition, three dogs, four runs each none of them clean. Just a quick sum up of our Sunday. 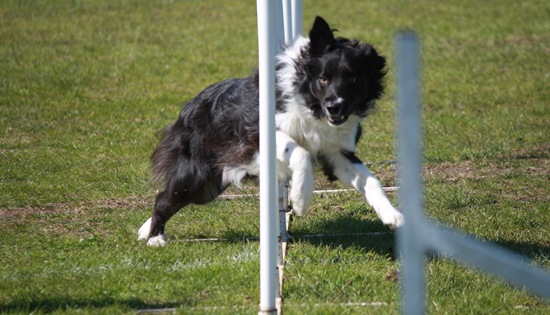 My mom and I took a road trip to Ribe as they held a trial for class 1 and 2 dogs. We had a bit of a rough start as Zap had forgotten how to weave! Later in the day I found out that the problem only occurred when I handled the weaves on the right. On the left no problem whatsoever. I really enjoy running him, he is intense, fast. If he would only remember to weave all twelve poles...

Poncho had some freaking awesome runs. He really kicked ass. A dropped bar in AG2 and SP2 kept us from running clean, otherwise the runs was flawless. We are really coming together as a team. Unfortunately I do not have any videos to post, as I forgot the video camera at home along side my the.

Bob had a blast. He got to play with has ball :) He was so great at the start line, ignoring all the other dogs. Last year he could not focus on much else, so major progress on his part as well. Bob ran well, but he lacks a bit of obstacle focus which lead to some refusals.

Many more trials to come this year and hopefully we will run clean?! Zap weave pole problem still puzzles me... hmm... oh, well on to the problem solving then.