I can't imagine a better way to end two months of summer leave than spending the last weekend participating in the National Championship 2012. 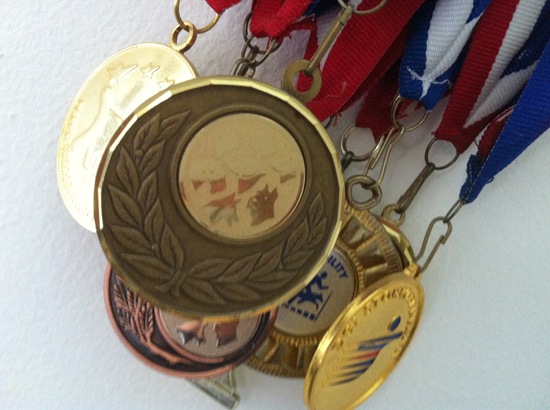 As we haven't competed much this season none of the dogs were qualified for the individual competition but we did enter the team competition as no qualification was required. I ran both dogs on the same team  - Team FUNtastic - along with Sys/Nemo and Carina/Sookie.

On Saturday we ran an agility course. Nice course with a good flow. Zap was first on start line. He held his sit stay, got his seesaw contact and did perfect rear cross into the weaves and then he skipped the last pole. I gave him one more go at it, but he skipped the last one again. We finished the course with a DQ, but I was pretty satisfied with our overall performance. I didn't have time to see Carina and Sys in the ring as I had to get Poncho ready for his run. Thank you Channie for helping out with the dogs.

Our run started out great, but I guess when he got to the weaves I was a little out of it and we picked up two faults. The rest of the course was perfect!

Hence the team name our goal was to have fun and we did. For the first time in a really long time I actually enjoyed running my dogs in the ring as much as at home. I really had my head in the game this time around.

On Sunday our team only consisted of Sys/Nemo, Poncho and I. I pulled Zap from the competition as he had a limp on his right leg again (already schedule an appointment at the Chiropractor) and Carina had to bale because some of her sheep had gone lost during the night.

Sys was first in the ring - she did a great job. I think Nemo picked up a refusal, but they had a nice and fluent run. Poncho did great as well, but dropped two bars due to my bad execution of turns. He did show of his awesome independent weaves though ;o)

A huge thanks to Sys and Carina for making it fun and enjoyable to compete!

I went home before the team and individual winners were announced. Congrats to all the new title holders but  especially to my friend Channie and her BC Zindy for winning team gold and to Maj and Cheri (Cosmo puppy) for winning team silver - Well done!