Sol has been living with us for almost two weeks already and she is growing like weed! She is one awesome, outgoing, naughty puppy - just the way I like them. 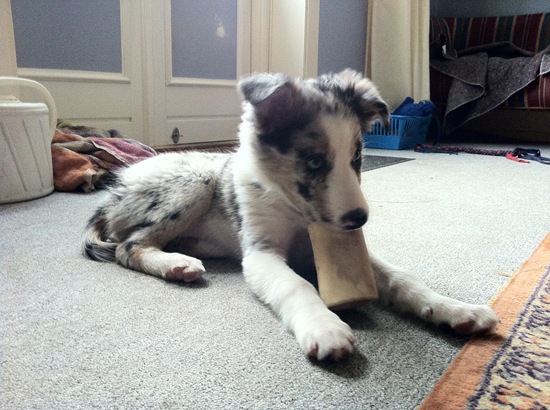 Pon, Liva and Zap accepted her instantly. Bob took a little longer and for the most part he still ignores her. Poncho and Zap spend a lot of time playing with her. Both tugging and wrestling. They are so sweet and gentle with her.

Sol will tug on anything including your hands, which hurts! The usual 'scream ouch and walk away' doesn't work on Sol. The sound of 'ouch' makes her tug even harder and if you get her to let go, she will attack your shoes or legs when you attempt to walk away. The solution was simple: shape puppy to let go on verbal command. It didn't take all that long to teach her and it works like a charm. The biting of hands etc. has been greatly reduced.

I introduced her to the clicker on her second day here and we've been shaping some simple behaviors. She can offer to sit, lay down and lift left or right front paw. 'Training sessions' has been no more then 2-3 minutes pr. day.

Playing a bit of crate games was a necessity as she didn't like the crate very much because of the long flight. She sleeps in a large wire crate at night in our bedroom and she will be crated when going for car rides. Crate games quickly altered her opinion about the crate and now she's willingly bounce in and out of her crate.

Shaping behaviors is the least of what Sol's been up to. Every day she figures out something new to do. Yesterday it was barking. seems like she likes the sound of her own voice. Before that it was using the water bowl as a paddling pool.

Besides from socializing with the other dogs of the household she has met some of my students dogs. On Saturday I took her to an indoor trial where she also met lots of dogs and people. She got so tired that she fell asleep on my arm and slept all the way home.

I am a bit tired though. It took a couple of days for her to get used to our time zone. She was still on Vegas time the first couple of days, which meant bouncy happy puppy at 3 am 'sigh'.
Now she sleeps though the night for the most part and then wakes up at 6 am and then the mayhem begins again.