When I introduce myself at seminars and classes I often tell people that been running agility since 1996, teaching since 2003 and in that time period I've had the chance to train ten BCs, but as of now i share my life with three. At this point someone always raise their eye brows and asks 'What happened to the rest of them?' So here it is, the story of all my border collies.

Genie & Speedy
As you probably know one border collie is not enough, so in 1999 I decided to have a litter on Fille. She was bred to the most winning agility border collie in Denmark at that time. A litter of 5 was born in December 1999 - two girls and three boys. From this litter I kept two puppies a female, Genie, and a male, Speedy. Speedy wasn't actually supposed to stay, but he didn't want to leave. 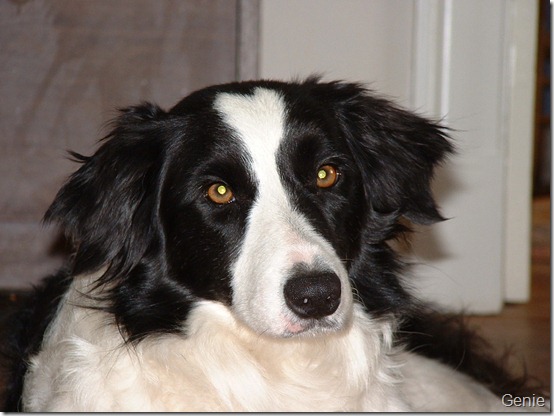 Everyone thought I was crazy for keeping two puppies from the same litter, but hey you only live once, so why not make the most of it?

Although they were born in the same litter they were to totally different kind of dogs. Speedy was very high drive, intense and stressed at times. I spend the first year of his life working on getting his stress level under control and teaching him lots and lots of impulse control. He was the type of dog that wanted nothing more than to please you. You could have him off leash everywhere as he couldn't dream of crossing the road without permission. Whenever Speedy was near an agility course he would loudly express how much he wanted to participate, unless you stuck a tennis ball down his throat. He could watch agility quietly if only he had a tennis ball he could chew on. Because of his high drive nature I figured he might be better of with a solid foundation in obedience. He needed some basic skills before starting agility training. He is to this date, and probably will be, the only one of my dogs getting the obedience title LP1. My plan paid off. When I started teaching Speedy agility in April 2002 he learned all handling and how to perform all the obstacles in less than 3 months and he fully lived up to his name.

Genie was outgoing and independent just like her mom. She loved running as fast as she could. Genie was focused and easy to train and at a very young age she would work through extreme distractions. I had learned a lot by training Fille, so I was way more focused in my training than before. Genie participated in her first agility competition at 20 months of age. She didn't run clean, but she ran fast and that was all I ever wanted. She struggled a bit with the weaves. At that time the spacing between the weave poles could vary from 55 cm to 60 cm. Genie had learned to weave using the V-method with 60 cm spacing, so whenever we competed at a venue with 55 cm spacing she would hit the entry but skip a pole every now and then. Her clean runs always placed her at the top of the list. Unfortunately none of the videos I have of our runs are digital neither are many of the photos I have of them both.
Genie possessed some pretty awesome problem solving skills. She could open drawers and doors. She was the first one to figure out how to open the garden door. It has a door handle which you need to push up, not down, to open the door.

Taking those two for a walk was really something. As soon as they were off leash they would run as fast as they could. Speedy in pole position and Genie right behind him. Watching them run always put a smile on my face.

One day after a trial in January 2002 Genie suffered from an epileptic seizure. I was terrified. It was so horrific to watch and afterwards she disorientated and could hardly recognize me. Little by little she gain consciousness. The Vet thought the seizure might be due to a stressful weekend of competitions, but not long after followed another and another and another etc. We started Phenobartial treatment. It helped at first, but seizures came back stronger and more frequent than before. During one seizure on an early morning in June Genie fell down a flight of stairs - 20 steps to be exact - during which her lumbar-sacral nerves was damaged. That seizure put an end to Genie's agility training. The following week Genie had seven severe seizures in one day - the vet had to use a large dose of stesolid (diazepam) to stop the seizures. Finally the vet came up with some new meds that could keep the seizures under control, the only side effect was that they made Genie extremely hungry. She would eat anything! With the seizures under control we could begin rehabilitation - Genie had suffered both physical and mental damage. Everyone told me how lucky I was to have Speedy as a back up now that Genie was retired.

All the meanwhile Speedy had been having diarrhea on and off. Due to all that was going on with Genie I didn't pay as much attention to it as I might have under normal circumstances. I wasn't until he pooped pretty much undigested food that I realized something was seriously wrong. A blood sample revealed the diagnosis: leukemia. An explorative laparoscopy showed that his intestines was filled with tumors the seize of golf balls - it would have been meaningless to try to remove them. It was hard to believe that the only symptom had been diarrhea. The week before he had been running agility at full speed. We decided to pass on treatment and hopefully give him a couple of good weeks on painkillers.

In the meanwhile Genie was making progress. Her rehabilitation was going well and she had not suffered another seizure. Only downside was she eat everything! One afternoon in August Genie got very ill. An x-ray showed a foreign body in her stomach. The Vet operated her immediately, but the damage was already done. Genie had swallowed a peach stone that perforated her small intestines. The vet patched her up as good as he could and then we crossed our fingers and hoped for the best.

On the evening of the 23th of August, a couple of days after Genies surgery, Speedy's condition took a turn for the worse. I knew the only thing to do was to let him go, but it didn't make the decision to drive to vet any easier. I don't think I have ever cried so much in my entire life. It was so though on everyone especially Genie. The only relief was knowing he wasn't in pain any more.

Following day Genie had a high fever and was in severe pain. Her operation wound was infected and a sample showed she had peritonitis as well. We left her  in the care of the vet for the night still mourning the loss of Speedy. The vet called us early the next morning telling us to hurry to the clinic if wanted to say goodbye to Genie. So we did.

As I am writing this, eleven years later I have tears in my eyes. Loosing two dogs under the age of 3 within 36 hours was unbearable.

That must be enough sad stuff for one blog post. I'm ending this post on a positive note with lots of joyous photos in the video below. My god those two dogs were lots of fun.

One border collie isn't enough, so it didn't take long before Cosmo joined the family. Read more about him in A Truthful Tale: Part 3