Three trials in and I am already behind on updates - so here's a quick update.

In Ribe Poncho got a 2nd place and a leg in J2. He ran very well, got his contacts but unfortunately he dropped a couple of bars here and there due to my handling.

In Årslev we didn't have a single clean run. Again dropped bars and a single contact fault on the dog walk. The dog walk was set with a 180 degree turn at the exit and for some reason I decide to give his running contact a go, well-knowing that the chance of success was pretty much none-existing. As expected Poncho turned early touched the ground right beside the contact and did the 180. I am happy to see though, that whenever there's a turn at the exit Poncho hits the contact with his front paws. Hitting with the front paws instead of the rear makes the turn easier. When there's a straight exit he does a rear paw hit. I haven't taught him this - this is something he figured out all on his own. Besides from the missed contact Poncho ran the course perfectly. He ended up winning the class as he was the only one to make through the entire course. 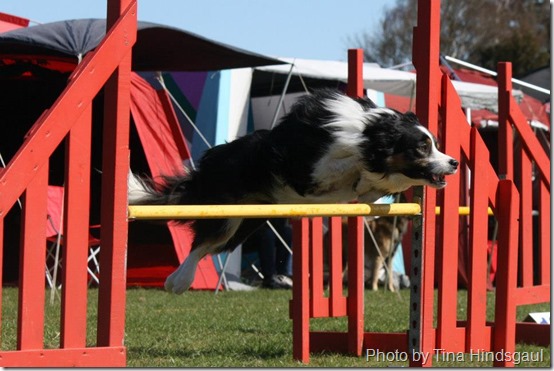 Last Tuesday I made a quick decision to compete with Zap after all. As some of you might know I actually decided to retire Zap after the VAS trial in February. Zap is a special dog with special needs. He gets very car sick and the sight of the car key makes him queasy. I never know how he will react in a new environment. Sometimes the smallest thing can trigger fear. It can be the sight of something in the air or a smell. I never managed to pinpoint exactly what triggers him. A couple of weeks ago as I was at the pet store to get dry shampoo for little miss smelly pup and I came across a thunder shirt and thought 'Why not? I got everything to gain and nothing to loose'. After a couple of car rides without Zap feeling quite as queasy as usually I thought I might give trialing with Zap another go. 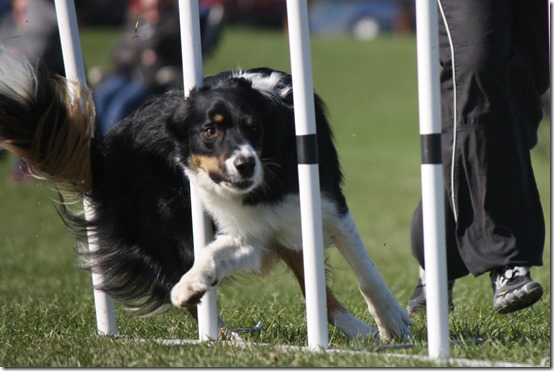 This past weekend I competed with both Zap and Poncho in Albertslund. My only goal with Zap was to get all 12 poles in the weaves. He weaved 3 out of 4 perfectly on Saturday and got all four on Sunday. He even managed to impress me with some rather brilliant contact and distance skills. He is very high drive, though. While his jumping skills and speed on course is amazing his tendency to easily switch from high drive to super stressed isn't. 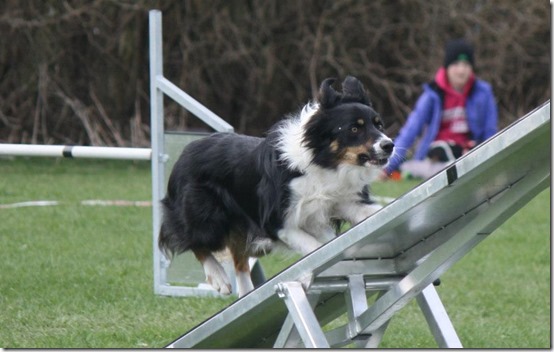 Poncho ran clean in J2 on Saturday and won the class. I was convinced that he need one more win to compete in J3, so I ran the J2 course with him on Sunday as well. It wasn't until the end of Sunday I realized that Saturday's win was the last one needed to compete in J3! So J3 here we come - let the champ ticket hunt begin! Poncho ran really well all weekend. He got a fifth place in A2 with one bar down, but with the fastest course time of the class. He was about 2 seconds faster than the team winning the class!

This weekend we will be at Albertslund again. I am so excited to be running J3 with Poncho.