Can one ever get too many tunnels?

The answer is no. We got a special delivery today – two new tunnels. One is 6 meters and the other is 4. I had one 5 meter tunnel already which brings the total tunnel count up to 3. 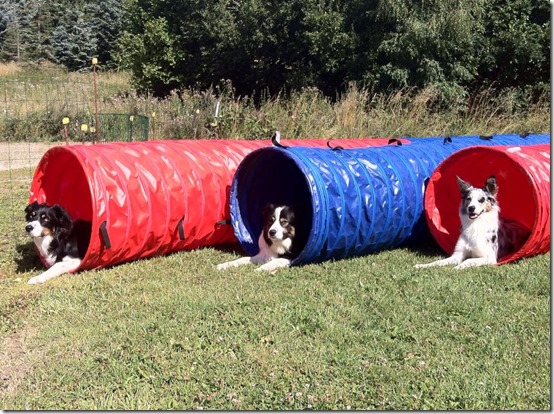 Tunnels are so much fun and the dogs loves them. They are great for training distance, discrimination on verbal cue and they can be used as a reward on course.

At an early age I got Sol’s tunnel behavior on a verbal cue. The video below shows her distance (20m) and verbal discrimination skills. I am sitting in a chair facing the tunnels and she is facing away from the tunnels as I give her the tunnel cue. No lure, no send or handling – only a verbal tunnel cue.

In the following video all three dogs are placed in a sit-stay about 1 meter from the tunnel entry. the tunnels are placed close together so it would be easy for the dogs to divert from the line set for them and take another tunnel than the one directly in front of them. All three of them understand that they should stay hold their line until they are told otherwise. The tunnels were working as both a distraction to the sit-stay and as a reward for holding the stationary position until verbal release.