I love watching YouTube videos; it gives me great inspiration on dog training from all over the world while I sit on my couch with a cup of tea. But one of the things that always comes to my mind is; Why do people rehearsing mistakes?
Take someone who's practicing agility sequencing. They might run in to trouble at obstacle 5 or 6 in the sequence but until then the dog and handler performance was flawless. At obstacle 5 they might have an off-course elimination due to handler mistake or lack of understanding. Then they try the sequence again and the same fault occurs.
Hmm.
The fault can have many contributing causes - I won't go in to details, but one thing is for sure the dog does not make a mistake on purpose or because he's naughty or rude and definitely not just to piss off his handler. All those qualities are some human beings posses.
I really can't quote Susan Garrett enough on this one;
Your dog is a reflection of your abilities as a dog trainer.
Back to the reoccurring fault; instead of stopping to evaluate the situation, they try the sequence again and again and at some point along the way the dog by accident gets it right. Now biggest mistake takes place; When the dog finally got it right the handler doesn't stop to reward the correct behavior! Instead they continue on with obstacle number 6, 7, 8. At this point I'm so confused on behalf of the dog and I'm almost screaming at my computer "WTF are you doing.?!" (just ask Tim - he thinks it's so much fun watching me watching YouTube.)
How do you expect the dog to know what the right response to your handling is when you don't reward it?
Remember that dogs learns from repeating things and from reinforcement so if you rehearse a fault over and over again it becomes the "right" response in the dogs mind. As Morgan Spencer says one fault is a mistake, two faults is a trend, three faults is a lifestyle.
I just makes me a bit sad on behalf of the dog; they really try their best and still they get labeled as rude.
I'm not saying my way of doing things is the best and that I don't make mistakes - Hell, I made all of those mistakes myself at some point - training 8 border collies in 13 years gives you plenty of room for mistakes - but you need to learn from you mistakes and from watching others. Perhaps you got eliminated at a trail and you leave the ring thinking that was absolutely not my fault this time. Later when you watch the run on video, you see the obvious that the dog was just responding to your handling and you were the one making the mistake. Wow that really makes me feel guilty because my dog is great and I'm an ass blaming him for my mistakes. You don't learn anything from blaming your dog for your own mistakes. But I grant you this; it does take some amount of self-criticism to acknowledge who made the mistake and it is easier on your self-esteem to blame the dog.

Here's what I would do; first of all I would not sequence my dog unless I'm certain that he has a very clear understanding of shadow handling and sees a lot of value for the obstacles.
If a fault occurs I would stop and think about why and what I did to make it happen.
Then I'd try the sequence again. If for some reason we were to make the same mistake again I can do one out of two things:

1) Try the sequence again, but this time I would show my dog how I would handle the sequence if the fault was the right response and then I would reward my dog for getting it right.

2) Break down the sequence in smaller pieces working on the problem area and getting one criteria right at a time. This is definitely the solution I would choose with a young inexperienced dog.

No matter what handling system you use or how experienced you are as a handler I think your working relationship only improves if you teach shadow handling and work on a lot of one jump exercises. 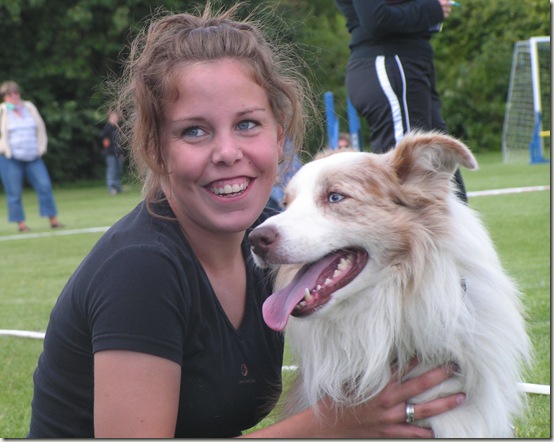