I decided to defy the snow and went out to train the dogs. Because of the snow our running contact training has been postponed for almost two months, but I decided it was time for our very first session today.

I have been in doubt about which method to use; Ali Roukas, Rachel Sanders or Silvia Trkman. I had the same doubt when I started running contact training with Jazz. My decision is based on the same as it was then - simplicity! That's why I'm going with Silvia's method. It's simple and you'll have your success rate to lean on. I like simplicity because I'm absolutely awful at multitasking! Whoever claimed women could multitask obviously didn't include me in their research. I can't wash the dishes and be part of a conversation at the same time. Imagine what would happen if I were to run, click and watch my dog hit a target with both front feet at the same time and then throw the reward at the right time - Yeah, it wouldn't happen in this life time.

Below: Jazz waiting for training to begin. 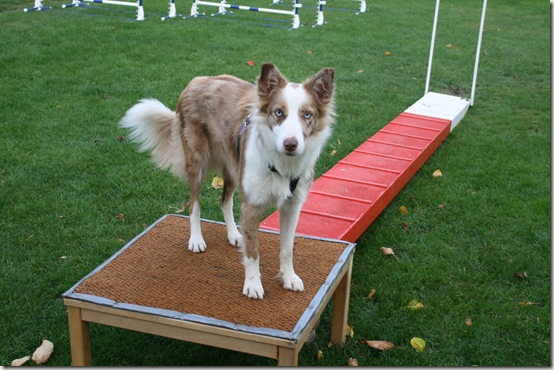 So why am I so into running contacts that I want to retrain a dog with reliable 2on2off contacts? Well, I have tried 2on2off with 4 dogs (Fille, Genie, Speedy and Cosmo) but I never felt it fitted my handling and it isn't part of my idea of a perfect run. I want independency, accuracy and speed and I want my dogs to perform with a minimum of stress on their bodies. Plus I want a criteria that is easy for me to maintain under pressure.

So how did our first session go? It actually went pretty well. Even though I'm retraining Poncho he had the exact same success rate as Zap - just above 80%. Zap is so much like his half sister Jazz - he sees so much value for the plank that the reward is indifferent to him. He'll pick up the toy, bring it to me and play with it, but the biggest reward is running over that plank on the ground. I se so many similarities between Jazz and Zap. I'll try to get tomorrows session on video. Tim watched our training and said that if I wasn't so bad at throwing the reward it would have been perfect :) Maybe I should rethink videoing our training - it is so embarrassing how bad my throwing is.

It looks like I will be training and trailing with Bob after all. He is such an affectionate dog. Hopefully he will be taught running contacts as well, but it pretty much depends on my mom since Bob is her dog and I don't get to train him on a regular basis.

Poncho had his first indoor agility class session on Wednesday. It went very well. He is so fast and my timing is so bad, but we ended up getting more into sync. I really missed agility class. I can't wait for next weeks session.

So how am I doing? I'm taking one day at the time. I haven't heard from the police yet, but I know they talked to my witness on Wednesday this week. I try to focus on the positive. I also got the first out of tree results on my exams which was very positive; I finally past Biophysics!

I want to thank everyone of you for your comments, texts and emails - Thank you so much, it really means a lot to me!