The list of upcoming litters on the border collie club website is getting bigger by the minute. The last time I checked there was nothing less than 18 litters in the making! For such a small country like Denmark that is a lot, specially if you want to find qualified homes for all of them.

I've been meaning to write about this subject for quit a while, but since it's a rather sensitive subject and everyone has a opinion about it I've postponed it. But here goes. my reason for doing this, besides being a vet.med.stud. who past her Applied Genetics exam in November with flying colors, is I see more and more ill-proportioned and bad tempered border collies. I guess it's the same trend with every breed; when they become popular people start to breed on what ever they got and we'll end up a with breed with disorders both physically and mentally.

One of the reasons I postponed this post is that people let their feelings get in the way of their good judgment. In my opinion you can't be overcritical when choosing dogs to breed on. I don't think it's a good idea to breed just for the fun of it or for the money. You might think your dog is the best dog ever, but can this dog contribute positively to the breed? It's very important to evaluate every thinkable aspect of the dog. Of course we all have a different picture of what the perfect border collie is but I hope we can all agree that behavioral issues isn't a part of the picture. 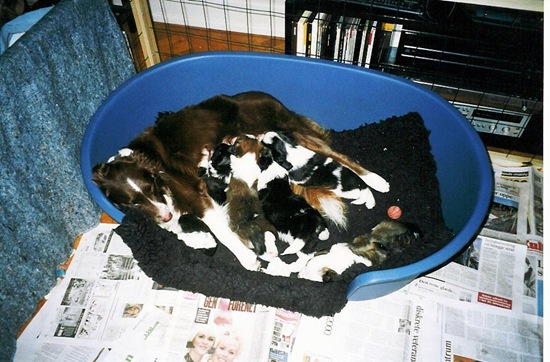 Just to get the facts strait on the basic genetics: A puppy gets half it's genes from it's dam (mother) and half from it's sire (father). Some people think male genes dominates female genes, but there really is no such thing. A dog's phenotype (P) is what you can observe, like coat color. The genotype (G) is the course of the phenotype, but the phenotype is also affected by the environment (E) which gives:

Some genes are dominant, some are recessive. You can't tell whether or not a dog carries a recessive gene just by looking at the phenotype. The dominance of a gene is broken during the meiosis because the puppy gets one part of the gene pair from each parent. Some genes has high or low penetration and some show epitasis towards other genes (eered). Dominant genes can also be incomplete dominant (merle) or co-dominant (lilac).

Some disorders like hip dysplasia or osteochondrosis are polygenetic which means many genes influences the phenotype. So you can't talk about recessive or dominant genes and therefore not blame one or the other parent for the disorder - it's the combination. Furthermore these disorders are highly influenced by the environment.

Ok, that was a bit technical, but think about the consequences of these facts. Some strive to find a male that will make up for the flaws of their female. This is, of course, better than not be thinking about flaws at all, but what ever you do you'll still get a small amount of puppies that has a lower value than their mother.

It is great that we have rules and restrictions on the border collie breeding such as eye testing and x-ray of hips etc., but one thing breeders seam to forget is the overall structure of the dog. They are happy when all the puppies in a litter got A hips, but what does that really matter if a dog has patella luxation or the whole litter has bad rear angulations?

We want faster and faster agility dogs who can turn swiftly and has awesome jumping skills, but it really feels like the breeding can't keep up with this. We need agile dogs with a sound structure and you don't get that just by looking at X-rays. I mean, why continue to use a stud dog in breeding that might produce good hip score but sucks when it comes to overall structure?

Bad rear angulations or anywhere else on a dog courses stress and strain on joints and ligaments. This produces an untypical gait, improper use of joints etc. which might lead to early retirement or in worst case expensive operations.

For me a fast agility dog isn't enough. I want a stable and reliable dog - not aggressive, nervous or shy but a dog I can take with me everywhere. By first hand experience I know life is to short for an ill tempered dog. Don't get me wrong here, I'm all for positive training and I know you can make up for a lot of things by socializing your puppy, but you can't compete with bad genes.

You never know for certain if a dog's ill temper is simply genetic or affected by the environment in which the dog lives. You might be able to draw this conclusion when observing the puppies from it's first litter - but why take the risk in the first place?

With the knowledge we currently have there isn't an excuse for the inconsiderate breeding we are doing today. We have the knowledge to breed better dogs so why not aim to do so?

(Wow! That became a pretty long blog post - please write your name in a comment to let me know that you made it this far)