Zap is now 15 months old and I started teaching him the 2x2 weave this week. He's almost weaving 4 straight poles, but I want to work more on entries and he's getting next week off -his brain and body needs a break. I got all sessions on video, but instead of posting small videos of each session I will make a video of more sessions combined so you will be able to see his progress day by day in the same video.

In case you have been wondering why I haven't written about our running contacts lately that's because I ran into some trouble with Bob and Zap. What I love most about agility is the teaching part; that part where I form my dogs behavior in order to get what I want. That's is for me the fun part. But if the road to the goal isn't fun then I'm choosing another road. I don't want to do anything if it isn't fun for me or my dog.

Given the fact that Bob doesn't live with me and I can't train him as often made the running contacts to much of a gamble for my taste. Zap on the other hand has a very bouncy stride which makes it so hard for me to decide whether it was a regular stride or a jump. This led to me rewarding incorrect behavior and not rewarding when Zap performed correctly which again led to me being confused and Zap loosing speed and confidence. I tried to start all over with the plank on the ground, but it just wasn't fun any more. So I stopped training running contacts for awhile hoping I would come up with a solution, because I really didn't want to give up.

I have come to a decision which affects all my dogs. The reason why I wanted my dogs to do running contacts was because I don't like a stopped behavior on the A-frame. I think a stopped A-frame puts to much strain and stress on the dog's body. However because the angle on the down plank of the dog walk isn't as steep as the A-frame I don't have the same issues with a stopped dog walk. So I studied courses and course times of dogs with running contacts vs. dogs with 2on2off and running dog walks doesn't seem to give you that much of an advance. At least not as much that would make me do anything to teach them. 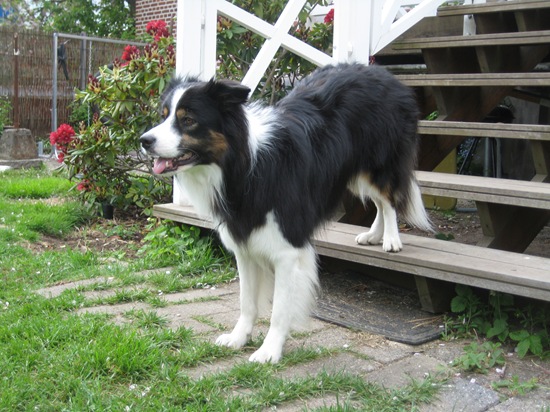 My decision is to teach 2on2off on the dog walk and a running A-frame. Poncho already has a great running A-frame taught by Silvia's method, but I'm going to use Rachel Sander's box method with Bob and Zap. I'm actually very pleased with this decision. The 2on2off dog walk is growing on me and I'm excited to get the training going. I'll write about my approach to 2on2off in a post later on.