When I introduce myself at seminars and classes I tell people that I've been running agility since 1996, teaching since 2003 and in that time period I've had ten BCs, but as of now I share my life with three. At this point someone always asks 'What happened to the rest of them?' So here it is, the story of all my border collies.

Cosmo
Not long after Genie and Speedy died I began searching for a new puppy. Truth be told when you have shared your life with several border collies one just won't suffice. Plus Fille was retired and I really wanted a dog I could run agility with. 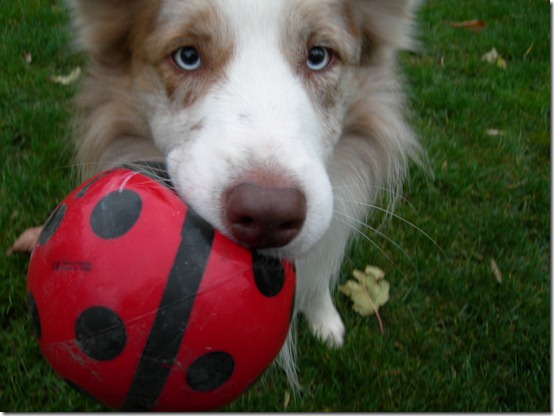 Choosing a dog by it's color
- a thing you'll only do once. I had always liked red merles and my search for one took me to England. In October 2002 Cosmo, a red merle BC male, flew with me to Denmark. I didn't pay much attention to the fact that he was bred in a shed and spend the first 8 weeks of life in it neither did I find it strange that his mother wasn't around when I picked him up. It didn't seem to matter at the time. My criteria for choosing a puppy was that is was red merle and a male - Cosmo was just that.

He was very sweet as a puppy, but had major resource guarding issues but otherwise he got along with humans and other dogs. Like with my other dogs main focus for his puppy training was socialization and environmental training. Until Cosmo was 6 months old, he was your regular happy, outgoing puppy. Then from one day to the other he did a 180 going from happy puppy to insecure and aggressive. Attacking his best buddies, growling and snapping at humans who wanted to greet him. There wasn't any situation that trigged his change in behavior - he just sort of snapped. We did the whole vet check up, but there was no physiological explanation for his behavior. It quickly progressed to include all types of dogs no matter breed or sex plus people he didn't know well. Every walk turned into a nightmare; he would snap at pedestrians and lunge him self at other dogs. Since I walked him on leash he couldn't reach the other dogs, instead he redirected his aggression to Fille, biting her instead. Poor Fille. 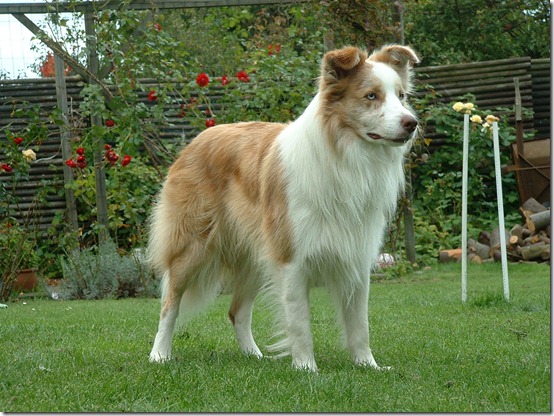 Up until this point I had never had to deal with aggressions, insecurity or intense stress. I was desperate! I took everyone's well-meaning advice and tried their methods to fix Cosmo's behavior problem. The methods extended from putting him to sleep, let him wear a muzzle at all times to some rather violent stuff. In my desperation I tried most of the them. When none of them worked I contacted several behavior specialists. They practically all said the same: click and reward for being calm around other dogs. They made it seem like an easy problem to fix. They said I simply had have enough distance between Cosmo and I and the other dogs, so he would not react to them. Then gradually reduce the distance. Seemed easy enough. If I had know that it was going to be life long project and how often something bump your progress back square one not to mention what an emotional rollercoaster it would be, I would have ended it right then and there.

I did the whole click-to-calm and all that, and yes it did help a bit, but he was still very unpredictable and whenever stress kicked in you couldn't reach him.

Agility
When running agility Cosmo was a totally different dog. He was focused and ignored his surroundings. As I had done the foundation training with three dogs within the last 5 years I had a pretty good idea of what I was doing. The only problem I experienced during Cosmo's foundation training was that he was afraid of heights. It took me 6 months to back chain the dog walk. He had always had en issue with crossing bridges and walking up stairs in apartment buildings, but since I was struggling with his behavioral issue it never occurred to me that it might be a problem. 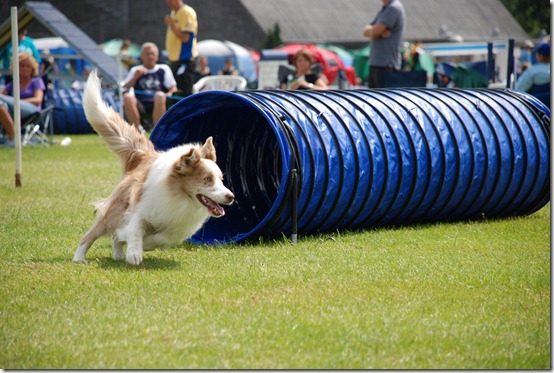 When I began competing with Cosmo we advanced quickly. It took only 3 months from his first win in class 1 to win his way into class 3. I was thrilled. When we began competing in class 3 I began to listen to people on handling, advice on tight turns etc. Until then I had trained Cosmo mostly without guidance, and it had worked well. I began listening to people as we were suddenly mingling with the best, so I tried new handling and training methods. It had never before occurred to me to be nervous at competitions. I simply stepped in to the ring and ran my dog - as simple as that. No one had ever paid much attention to my runs or commented on my handling. Now I felt like everyone was watching us and judging my every move. I remember one competition I was starting right after Jenny Damm and Lotus - the former world champions! I totally choked and got eliminated on the third obstacle. I left the ring packed my stuff and drove home - suddenly agility wasn't as fun as it used to be. 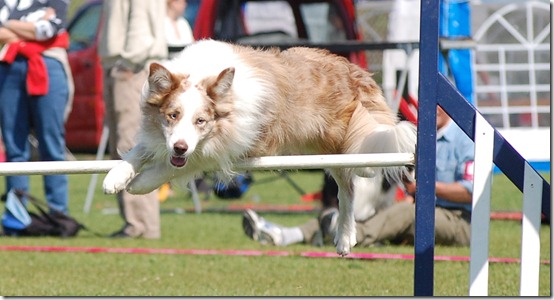 At the age of 3 Cosmo started stuttering before the jumps and taking extra strides right before take off. He began knocking down bars and struggled with the double. His jumping problem gradually progressed. This is when I first got interested in jumping skills and the mechanics in jumping. I didn't compete with Cosmo for a year while I was working on his jumping skills. I saw other dogs make huge progress when taught to use their body correctly, but it didn't really work on Cosmo. Looking back on the process: the sudden onset of awkward jumping and him being afraid of heights I am convinced that he suffered from Early Take-Off Syndrome. 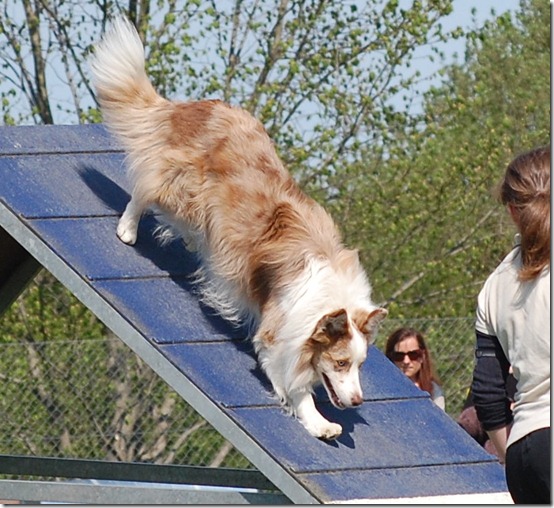 Breeding
Yes you did read correctly! To me Cosmo was a great working dog, and when some asked if they could use him in breeding I didn't say no. I was honored that someone liked my dog enough to let him sire a litter. I informed the owner of the female of his behavior problems, but I was convinced that his problems were my fault. I asked around to figure out if his aggressive behavior might be genetic. The people I asked were someone I really respected breeding wise, so I believed them when they told me that Cosmo behavior problems was something he had picked up and it wasn't genetic. So in 2008 Cosmo sired a litter of 7 puppies. When I later on learned the truth about genetics through my classes at the university I realized my mistake. Letting Cosmo become part of a breeding program is one of things in my life I regret the most. Please learn from my mistake - the world have seen enough aggressive, nervous, stressed out border collies!

The ugly truth
As the header says this is a truthful tale so here comes the ugly truth
Although I was very precocious when walking Cosmo and tried to control every situation I couldn't at all times. In those six years with Cosmo he managed to bite a child, a dog and a puppy. He wore a muzzle the most of the time, as I could not have him injuring innocent dogs and humans. He didn't wear the muzzle at trials because when there was agility insight he would ignore everything else and focus on me. I felt like agility was my safe place until he bit a puppy that accidentally made it's way into our tent. That was the last drop. I got an appointment at the Vet the next day and Cosmo was euthanized.

Should I have used him in breeding? Hell no!
Do I regret it? YES!
Was I stupid enough to get a puppy from that exact litter sired by Cosmo? Oh Yes.

I never blogged about this before now. At that time I was convinced that I was the cause of all Cosmo's problems. I am not going to give the traditional speech on how much this dog taught me about dog training and behavior 'cause those are lessons I would rather have lived happily without. He made me feel insecure. My sincere apology to those affected by Cosmo one way or the other.

Today 4 years later I still get flashes of panic whenever a dog comes around the corner and surprises us. For a second I need to remind myself that I am not walking Cosmo.

Well, it doesn't end here. Next up it the story about Cosmo's daughter, Jazz. Sit tight for A Truthful Tale: Part 4.